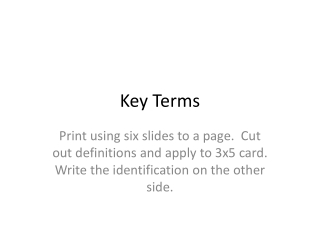 Key Terms. Print using six slides to a page. Cut out definitions and apply to 3x5 card. Write the identification on the other side. Abbasid Caliphate. Cosmopolitan Arabic dynasty (750-1258) that replaced the Umayyads ; founded by Abu al-Abbas and reached its peak under Harun al-Rashid. Key Terms - . think about. a definition examples of what recipes / methods of cookery they are used in. gelatinisation.

Key terms - . sociolect or “ social dialect ”: linguistic differentiation based upon on membership in a longstanding

Key Terms - . print using six slides to a page. cut out definitions and apply to 3x5 card. write the identification on

Key Terms - . denotation - refers to the simplest, most obvious level of meaning of a sign, be it a word, image, object

Key Terms - . juul: a recent entrant into the personal vaporizer market. thin and convenient, it has quickly taken hold.

Key terms: - . species. a biological species is: a group of organisms that can interbreed and are reproductively isolated

Key terms - . (not in size 72 purple). antenna. an electrical device that sends or receives radio or television signals

Key Terms - . citizen : a person who owes allegiance to the united states and is under the protection of its laws jus