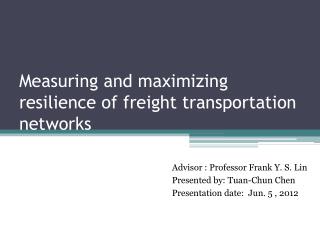 CONCEPTUALISING AND MEASURING ECONOMIC VULNERABILITY AND RESILIENCE - 2. layout. the presentation is organised as

WHAT IS FREIGHT TRANSPORTATION? - Freight transportation is the way by which freight is moved from one point to another.