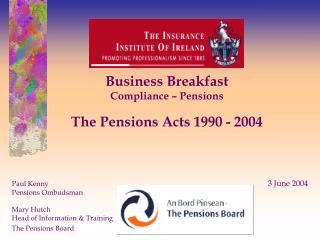 The ROADMAP to COMPLIANCE - . the importance of staying current on your compliance efforts. september 5, 2013. presenter:

IAS 19 - Pensions and other employee benefits - . executive summary. the concept, characteristics and accounting for

American National Insurance Company and YOU! - . “a partnership for the future”. ratings products easy to do business

HR Introduction to Civil Service pensions - . purpose of today’s presentation. to provide you with an overview of the

A General Theory of Crime Gottfredson and Hirschi (1990) - . “oops” -travis hirschi. the nature of crime and

College and career readiness - . reading a paycheck. where does my money go?. almost 31% of an individual’s paycheck is