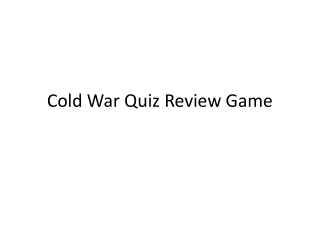 COLD WAR QUIZ - . know your vocabulary!. what was the name of the plan that provided $13 billion dollars in economic aid

Late, Late Cold War Quiz Review - . class will be divided into two groups. each person will have a number. when you are

Cold War Review - . head for your nearest bomb shelter…this test will be a nuclear missile!. where were the war-crimes

Cold War Review - . goal. to understand the different eras of the cold war and the events and leaders associated with

Quiz Review Game - . fashion- chapter 12 vocab. what is overall term for any form of communication used to inform,

Cold War 2 Review - . collapse of communism in eastern europe and the soviet union. who was president nixon’s most

The Cold War Review - . dress code 10 tardy = saturday no extra credit in history class. 30. which is the worst rule at

Cold War 2 Review - . collapse of communism in eastern europe and the soviet union. who was president nixon’s most

Cold War Test Review - . …as opposed to a hot war. question 1. the goal of the berlin blockade was to…. question 2.

Cold War Vocabulary Review - . what organization was formed to prevent future global wars?. what is a state of tension