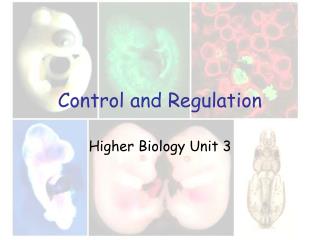 Control and Regulation. Higher Biology Unit 3. Growth and development. Growth patterns in plants and animals Growth is the irreversible increase in the dry mass of an organism. To avoid killing the organism other factors, such as height or fresh weight, may be used to measure. Control &amp; Regulation - . effects of chemicals on growth. mr g davidson. the importance of macro-elements in

Command and Control Regulation in Action - . regulating industrial water pollution in the us. clean water act of 1972.

Regulation and control of population size - . variation in populations. populations tend to vary in size over time and