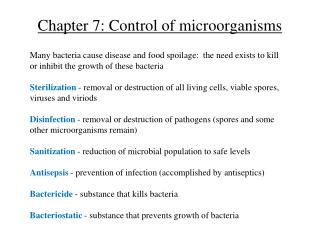 Chapter 7: Control of microorganisms. Many bacteria cause disease and food spoilage: the need exists to kill or inhibit the growth of these bacteria Sterilization - removal or destruction of all living cells, viable spores, viruses and viriods Innovative Solution to Control Biofilm in Drains - . zep biofilm drain purge a + b. pathogens reside in

Chapter 12 Control - . what is control? three approaches to control systems the control process types of control

Chapter 21 - Microorganisms and Metals - . objectives know the common toxic metals and the main sources that they come

Physical and Chemical Control of Microorganisms - . i. terms ii. factors which determine the effectiveness of control

1.4 Microorganisms - . goals. microorganisms are living things too small to see with just our eyes. we can use

Control Of Microorganisms In Foods - . introduction. the objective of controlling microorganisms in foods is to minimize

The Microbial World And You Chapter 1 - . biotech i . microbes in our lives. microorganisms are organisms that are too