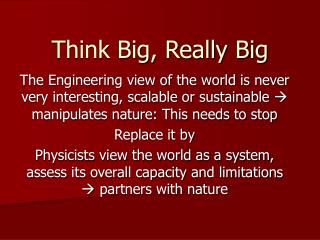 Think Big, Really Big. The Engineering view of the world is never very interesting, scalable or sustainable  manipulates nature: This needs to stop Replace it by Physicists view the world as a system, assess its overall capacity and limitations  partners with nature. An Issued Challenge. Think BIG! - . be people who inspire hope!. the best is yet to come!. thinking big. colossians 3:2 (esv). set your minds

Really Big Math - . (or) what you can do with 1,054 envelopes and a whole bunch of tape. tetrahedra made from standard

Think BIG, start small! - . what is green impact?. a departmental environmental accreditation scheme with an awards

Some REALLY Big Business Principles - . unit 1: introduction to concepts (stuff you have to know and understand before we