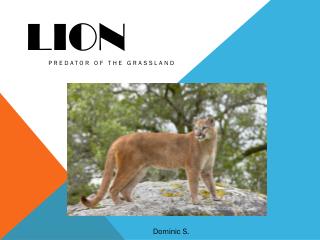 LION. Predator of the Grassland. Dominic S. Introduction. There scientific name is Panthera Leo They are big cats Very self confident Different from other cats very social and live in packs Only lion that lives in packs. What Lions Looks Like. Very strong legs Lion - . by.luke ms.wienberg. lion. why i chose my animal?. i chose lion because it locks cool and has sharp teeth and

lion - . what is a lion. a lion is a big cat lions are strong and fierce a male lion has long hair around his neck called

lion - . lion’s biome. “today it is found only in protected areas south of the sahara in africa and in the gir

lion - . the wildest animal in the hole wide world . lions have strong bodies and powerful legs, teeth and jaws. they are

lion - . by thomas. my animal is. a lion. it belongs to the group of. a mamml. my animal eats. zebra or bufalow. facts

lion - . i ce cream. toad. frog. flame. pitcher. yawn. beside. binoculars. brave. above. waiter. below. between.

Mountain lion vs. African lion - . where it lives. its size. to roar or not to roar. its lifestyle. hunting—what and

lion - . by: christian t. physical characteristics. they have tan fur. they also are 48 inches high . they weigh 300 to

Sea lion - . hays and ellie. description. sea lions are eared seals with a thick furry neck that looks like a lion’s

Raging Lion - Men may be particular their own organ while having sex. raging lion male enhancement they have an involving