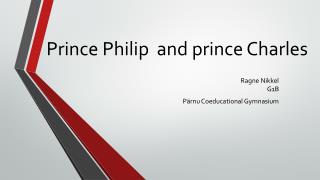 PRINCE - . a bout. stands a mere 5’2” (taller with his infamous stilettos) has 100s of unreleased songs in his

Gwen and Prince - . polish english version of cinderella. once upon a time in a kingdom ruled by a righteous and handsome

Prince henry - . by ella and logan. parents. he was the 3 rd surviving son of king john. the daughter of the english duke

Prince Henry - . by: vincent dicostantino. born in march 1394 and died in november 1460. birthplace : porto, kingdom of

One Prince! - . a kidnapping. can he be rescued?. it is all up to an ancient wizard, a fey, a mostly invisible, yodeling