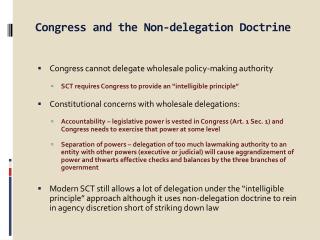 Congress and the Non-delegation Doctrine Congress and the Non-delegation Doctrine

Congress - . i. why congress was created. during the constitutional convention, there were two schools of thought

Delegation Client Care - . class objectives:. after the discussion we will be able to: define delegation &amp; the

A Return To Peace - . the congress of vienna. the principles of the congress. balance of power and legitimacy. reaction,

Aristotle doctrine that “Man is by Nature a Zōon Politikon” - . a) richard mulgan, aristotle’s political theory

The History of Christian Doctrine - . “history is written by the victors.”. agenda. tonight irenaeus tertullian