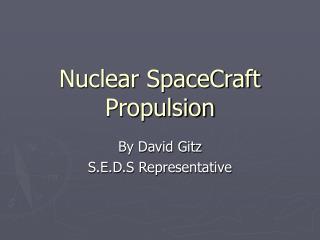 JET PROPULSION - . part 2 the jet engine. combustion. the gas path and temperatures. the shaded area is called the ‘

Nuclear Weapons 101 - . “the nuclear bomb is the most anti-democratic, anti-human, outright evil thing that man has

Internal Combustion Engines: The Worst Form of Vehicle Propulsion - Except for All the Other Forms A primer on IC - S and