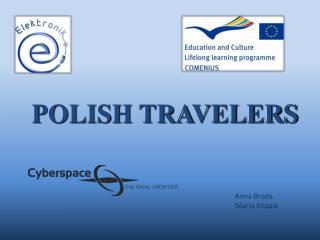 Travelers Checks - . travelers checks- checks that you pay for in advance, and if they are lost or stolen, the issuing

World Travelers! - . where in the world do you want to go?. planning your trip…. the first thing to do is read all the

Polish … - . art has always been a big part of our lives. by art we can

Welcome Back Travelers! - Enter the room quietly. pick up a daily handout. turn in your graduation project body point 4

Welcome Back travelers… - Enter the classroom silently. retrieve any materials you may need before the bell rings. get

Travelers’ User Guide - If your travel coordinator enters trip details on your behalf, you only need to focus on

POLISH FOLKLORE - . prezentacje uczniÓw. krakow folklore . krakowiak is the most popular dance, which became a polish