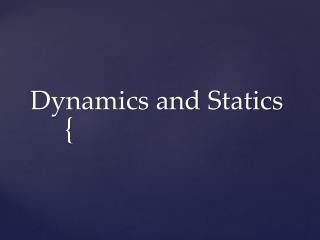 Dynamics and Statics. What is the resultant velocity vector on a go kart that is traveling at 10 m/s north and is being blow by the wind 0.5m/s east? Include the magnitude and angle. Bellringer. Learn more vocabulary that will help you solve dynamics and statics problems STATICS AND DYNAMICS - Looking at forces. peace cannot be kept by force; it can only be achieved by

Statics and Dynamics Problem Solving RULES! - Mechanics is the paradise of the mathematical sciences, because by means of

Statics - . chapter 3. external and internal forces. the forces acting on the body of the rigid can be divided into two