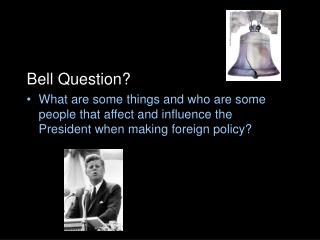 Bell Question?. What are some things and who are some people that affect and influence the President when making foreign policy?. Politics of Foreign Policy . Policy Development Inside the White House. Objectives. Understand the history of American foreign policy. What does the Torah refer to? With whom does Judaism begin? - Bell ringer, 8-20. please copy down the following questions

BELL RINGER 1.3.2013 - . take out your reading notes to be checked. if you did any extra credit work, take them out to be

What is Africa’s third largest country? What is the major unifying factor of Zaire? - Bell ringer, 2/14. please copy

Bell Work - . pretend you work for jeopardy ! come up with a category w rite three questions assign each question a value

BELL RINGER 1.9.2012 - . take out your reading assignment and dream log projects to turn in. if you did any extra credit