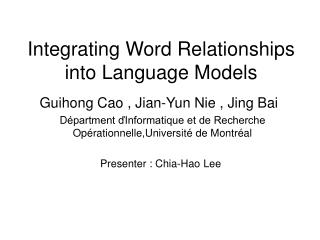 Word Relationships - . words can be related in many ways. synonyms. two words that mean the same or almost the same

Challenges of Integrating Biophysical Information into Agricultural Sector Models - The university of tennessee.

Integrating Word and Excel , - . objectives. learn about object linking and embedding (ole) embed an excel chart in a

Language Models - . naama kraus. slides are based on introduction to information retrieval book by manning, raghavan and

Into the Word - . word inspired . 16  all scripture is god-breathed and is useful for teaching, rebuking, correcting