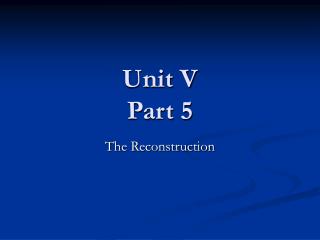 Unit V Part 5. The Reconstruction. The Reconstruction 1865-1877. Was seen as the only way to prevent the South from restoring their pre-war society Was an important first step toward Civil Rights The Constitution v Social Changes It will fail But it was less of a failure than first thought UNIT 6 , Part 1 The Extraordinary and Fantastic - . click the mouse button or press the space bar to continue. unit 6,