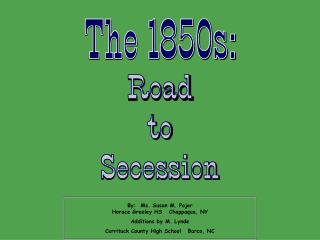 The 1850s: - . road to secession. slavery in the territories. westward movement turned out to be not only dangerous for

The Incorporation of America - . essential question. industrialization increased the standard of living and the

Petaluma -1877 - . history of first presbyterian church of petaluma. 1852 : the survey for petaluma completed. an

Chapter 14 Big Business - . essential question. how did the changes in technology and business impact the economic,

The 1850s: - . road to secession. based on an original powerpoint by ms. susan m. pojer with additional slides by bob

Chapter Fifteen - . the coming crisis, the 1850s. part one:. introduction. chapter focus questions . why did the whigs