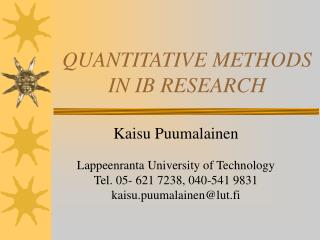 QUANTITATIVE METHODS IN IB RESEARCH. Kaisu Puumalainen Lappeenranta University of Technology Tel. 05- 621 7238, 040-541 9831 kaisu.puumalainen@lut.fi. INTRODUCTION. After the course, you can…. critically evaluate the research design and results of empirical studies Introduction to Quantitative Business Methods - . (do i really have to know this stuff?). management science. …is the

Survey Research Methods - . presentation to the class of cis 9280 “ quantitative methods in is research ” at georgia

The Use of Theory Part 1: Quantitative Methods - . produced by the applied research center and the alvin sherman library.

Lesson 1 - Research methods. lesson 1. ms stedmon. quantitative research. aim: to be able to recognise the features of a