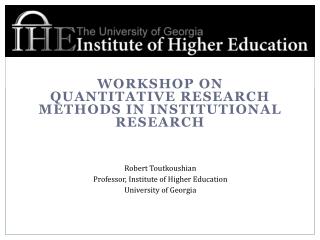 Workshop on Quantitative research methods in institutional research. Robert Toutkoushian Professor, Institute of Higher Education University of Georgia. My Statistics Background. PhD in economics, focus on econometrics Worked in IR for 14 years (7 at the U) Criminology Today - . chapters 3 and 4. chapter 3: where do theories come from?. overview criminological research

Overseas Visitors Quantitative Research 2008/09 - . introduction. this report presents the findings for the overseas

Research Skills - . lo: how can i gather research quickly and effectively? starter: what methods of research do you