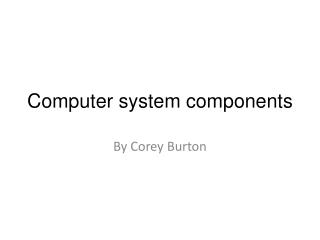 Chapter 2 - . computer hardware. the system unit. case that contains electronic components of the computer used to

Computer System Overview - . at a top level, a computer consists of processor, memory, and i/o components, with one or

Chapter 3: Computer Hardware Components: CPU, Memory, and I/O - . what is the typical configuration of a computer sold

An Architecture for CDS and Quality Measurement - . september 2013. architecture. the manner in which the components of a

The Computer System - . “the box”. computer case. usually called the chassis metal and plastic box that houses the