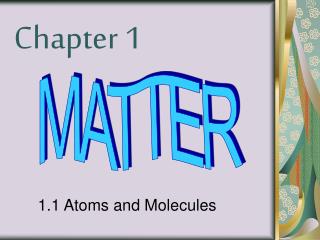 Chapter 1. MATTER. 1.1 Atoms and Molecules. At the end of this topic, students should be able to:. Identify and describe proton, electron and neutron. Define proton no.,Z, nucleon no., A and isotope. Write isotope notation.