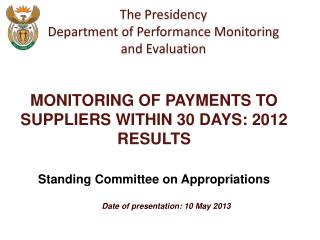 The Presidency Department of Performance Monitoring and Evaluation. Date of presentation: 10 May 2013. MONITORING OF PAYMENTS TO SUPPLIERS WITHIN 30 DAYS: 2012 RESULTS Standing Committee on Appropriations. 1. Background . Presentation to The Hon’ble Prime Minister June 19, 2013 - . foreign investment in bangladesh: opportunities and

Presentation title | Date - . who we are. building a healthier heartland (bhh) super-coalition of local and national

Date: 08 May 2013 Director-General Lionel October - Presentation to the select committee on trade and international