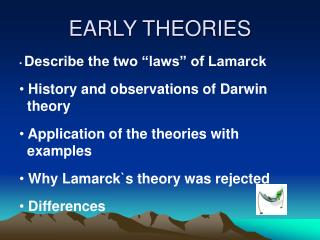 EARLY THEORIES. Describe the two “laws” of Lamarck History and observations of Darwin theory Application of the theories with examples Why Lamarck`s theory was rejected Differences. Jean-Baptiste Lamarck. French Biologist (1744-1829) Professor of “Worms and Insects” in Paris EARLY Atomic theories - . democritus. the greek philosopher democritus (460-370bc) was the first person to propose the

Early Atomic Theories - . history theories scientists models. what’s inside the box?. how can you determine the

Early Theories of Evolution - . jean baptiste de lamarck. scientist during the late 1700’s and early 1800’s among the

Early Theories of Intelligence - . charles spearman believed intelligence is general people who are bright in one area

Early Biological Theories (1 of 2) - . ▪ early history of criminology many early criminologists were physicians ▪

Theories of Early Childhood Education and Management - . chapter 3. theory. an organized set of statements that describes