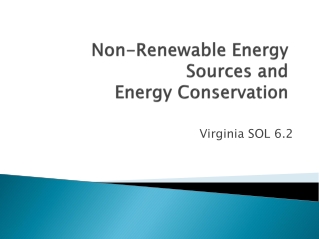 Non-Renewable Energy Sources and Energy Conservation. Virginia SOL 6.2. Blackout of 1965. In November of 1965, a power plant stopped working and much of the Northeast was left without electricity for over 13 hours. 30 million people were affected. Think about it. Renewable and Non-Renewable Energy Sources - . humans are very reliant upon electricity . think back to the

Renewable energy sources - . nowadays and predictions for the future. in the last 10 years , the earth warmed up by 1c.