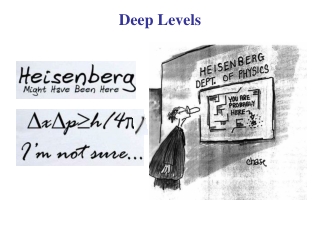 Deep Levels. “Deep Levels”  “Deep Centers”  “Deep Traps” An old research area for me. My treatment is similar to, but different from that in Ch. 4 the book on Semiconductors by Peter Yu & Manuel Cardona. Deep calling to deep - . god is the revealer of secrets known unto god are all his works from the beginning of the

Digging Deep: Making “Deep” Connections - . relate to literature. in the fictional passage in front of you, the main

DEEP THOUGHTS - . instead of having answers on math tests, can’t we just have opinions, and if my opinion is different

Deep Thought - . if i ever went to war, instead of throwing a grenade, i’d throw one of those small pumpkins. then