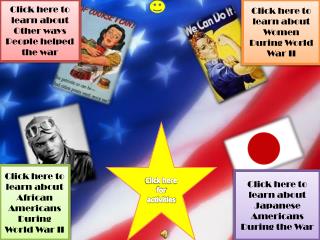 Click here to learn about Other ways People helped the war Click here to learn about Other ways People helped the war

To get the people to rebuild the temple of God, Haggai - The prophet of god calls upon them to consider your ways!.

Perspectives of Psychology - . ms. rebecca 2009. do now:. why do you think people think, feel and act in certain ways?

Land Of The Lost - . read this first. by: jennifer dana lauren &amp; miranda. click here to learn more click her to

Learn Your States! - . west. n.e. middlewest. s.e. southwest. click on a region to practice memorizing the states of that

Reading Street - . unit 1 week 5. how are people and animals important to one another?. animal friends. how do people

Antonyms - . a word that means the opposite. click to continue. click to return to choices. instructions. to advance to

Reading Street Unit 1 Week 1 - . how are people and animals important to one another?. animal friends. how do people take

Lesson 2: Ways to reduce eco-footprints - Why would kermit be described as a green consumer?. lesson 2: ways to reduce

Mammals in the Rainforest - . start. did you know … the rainforest is filled with many interesting mammals! get ready

Swimming - . what is swimming? why is water safety important? what is the history of recreational and competitive

What can we learn from people with Alzheimer’s disease? - . professor bob woods dementia services development centre