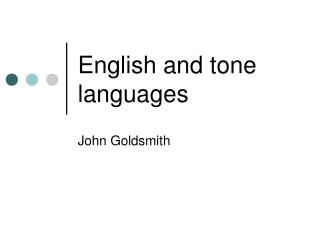 English and tone languages. John Goldsmith. English as a Tone Language. Some basics about language and speech Tone languages and non-tone languages around the world Intonation in English for those working in speech Languages Other than english - . welcome! 6c charger chat “all about the foreign language program”. languages other

L.O.T.E. – Languages Other Than English - . français, deutsch, español: as easy as a, b, c!. checkpoint definitions:.

KENMORE WEST Languages Other Than English - . french german spanish a b1 b2 c1 c2. what is the nys requirement for

8 Hard languages for English Speakers - Every language will come with its own challenges, but it’ll also come with its

Diction and Tone - . esl 015 wenli zhang. what’s your understanding of this sentence?. “t he difference between the