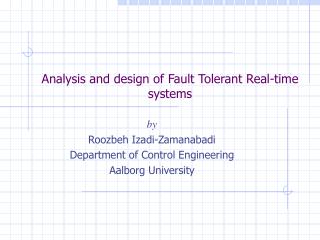 Probability Distribution of Some Time Characteristics of Fault-Tolerant Systems - . sergey frenkel institute of

fault-tolerant - . csc 8320 xiuyun shen. fault tolerance. computer systerms can fail due to a fault in some

CprE 545: FAULT-TOLERANT SYSTEMS - 2. nmr with spares. the idea here is to provide a basic core of n modes arranged in a