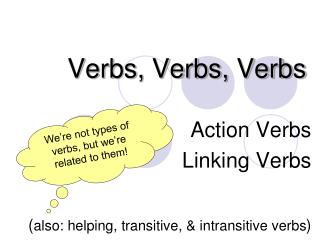 Verbs, Verbs, Verbs. We’re not types of verbs, but we’re related to them!. Action Verbs Linking Verbs. ( also: helping, transitive, & intransitive verbs ). Two, 2, dos, deux, zwei, ni, ,. action linking. There are ONLY two kinds of verbs on the planet. They are:. (tutu) .

Verbs - . verbs tell what a subject is or does. verbs also indicate the time, or tense, of an action. for example: past,

Linking Verbs - . by: amanda young and alanah hall. verbs. a verb is a word used to express action or a state of being.

Modal Verbs - . carmen torres. what are modal verbs?. they are: can could may might must shall should will would. ought

Verbs - . verbs. a verb shows action. there’s no doubt! it tells what the subject does, like sing and shout! action

Verbs - . is, am, was, are, and were. day 1 verbs. review verbs- a verb is a word that tells what someone or something

Modal Verbs - . carmen torres. what are modal verbs?. they are: can could may might must shall should will would. ought

Action Verbs vs. Blah Verbs - . although sometimes necessary, blah verbs offer no mental picture for the reader. be

Verbs - . click to add subtitle. type 1 date. what is a verb? brainstorm a definition. what’s a verb?. verbs express

Action Verbs vs. Linking Verbs - . reminder: action verbs. “indicate the action of a person or thing; action can be

-ER &amp; -IR Verbs - . as we saw in the previous presentation, there are three conjugations of verbs in spanish: