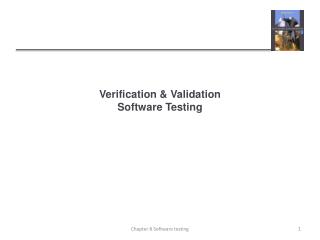 Verification & Validation Software Testing. Topics covered. Development testing Test-driven development Release testing User testing. Program testing. Testing is intended to show that a program does what it is intended to do and to discover program defects before it is put into use. CH08: Testing the Programs - . testing components individually and then integrating them to check the interfaces *

Software Testing - . cs 401. suppose you are asked:. would you trust a completely automated nuclear power plant? would

SMT and Its Application in Software Verification (Part II) - . yu-fang chen iis, academia sinica based on the slides of