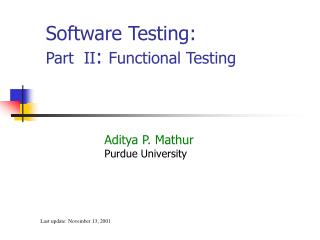 TESTING Test plan - 16 october 2013. testing test plan. reminder. yo u must have your system on a server for demo 2.

Introduction to Software Testing - . definition of software testing. previous testing is a part of coding work make sure

Rapid Software Testing - . rapid testing. this is a general testing methodology. it adapts to any kind of project or

Software testing techniques Testing tools - . presentation on the seminar kaunas university of technology. why do we need