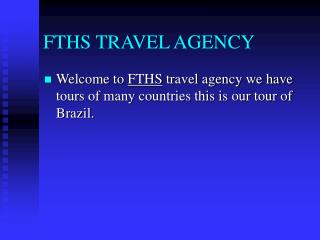 FTHS TRAVEL AGENCY. Welcome to FTHS travel agency we have tours of many countries this is our tour of Brazil. History of Brazil. A Travel Medicine Case - . thomas miller md. case #1. jack called from san francisco at 7:30 pm. “dad i am leaving for

Travel, Travel, Travel! - . 2013 idaho conference on refugees beth rutten-turner. the world is a book, and those who do

Who Are We? - . manna travel ventures pty ltd trading (manna) is a registered and accredited travel agency with a network

Understanding Travel &amp; Tourism - . before starting travel &amp; tourism course we should understand what is