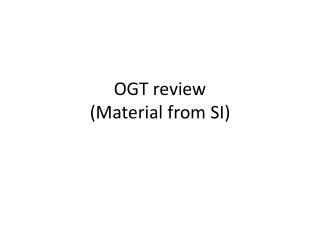 OGT Review - . elements. elements are the basic building blocks of matter. there are 115 known elements. this number

OGT Review 3 - Revised 2011. ogt review 3. what is imperialism?. policy used by some nations to take over other nations.

Trigonometry OGT Review - . find the sin, cos , and tan of angles a and b. find the trig value using a calculator. round

Social Studies OGT Review - . economics. types of economies. command – all economic decisions made by the government

OGT Short Answer Review - . “you mean we have to write in social studies too!?!”. format. ogt short answer responses