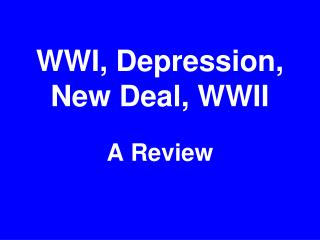 Depression / New Deal - . objectives. look at effects of the depression examine pictures to visual the impact of the

WWI - WWII - . what events caused wwi?. the alliance system all of europe was drawn into the war due to alliances.

WWI through the New Deal - U.s. involvement in wwi why we fought domestic impact preventing another war battling

Unit 4 : WWI, The Great Depression, and WWII - . the causes and effects of world war ii. have you seen these pictures

WWI and WWII - . african canadian roles. what was wwi?. it was known as first world war, the great war, and &quot;the

The Depression and New Deal - . the stock market crash and underlying causes of the depression. why does the 20s bull

The Depression and New Deal - . chapter 25 ap us history. part i: problems of the great depression. summary of the