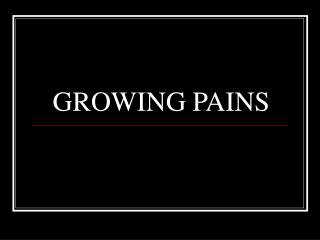 GROWING PAINS. Life was hard and some colonists began to grumble because Savannah was not the paradise they had expected. There were frequent and sometimes heavy rains and they were not used to the humidity, insects and heat of coastal Georgia. GROWING PAINS - . m. zeigler. in the beginning……. t hings were peaceful and beautiful. then some new people came,.

Growing Pains - . chapter: the south and the west transformed. objectives. explain the concept of the new south. account

Growing Pains - . lead-in. can you describe an experience with your parents that was not pleasant? e.g. i s there any

Growing Pains - . 严真. growing pains is an american television sitcom that ran on the abc network from 1985 to

Unit 2 Growing pains - . welcome to the unit. Ⅰ . lead-in. i’m coming and i want to share a story with you.

Growing Pains in Kids - Mumbai - Is your child suffering from growing pains in legs.?so don’t worry chubears help you

Growing Pains Work in Factories - . pg. 215-220. work in factories. after the civil war, many people moved to cities to

Growing Pains: The Internet in Adolescence - . fred baker isoc chairman of the board cisco fellow. the parable of the