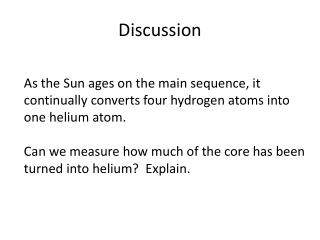 Discussion. As the Sun ages on the main sequence, it continually converts four hydrogen atoms into one helium atom. Can we measure how much of the core has been turned into helium? Explain. Discussion. Discussion - This patient presented following a trauma to the maxillary anterior region. she had suffered lateral

Discussion - . how can you tell whether a drawing represents a new isomer? how does the honc 1234 rule limit the number

Discussion - . brainstorm a list of 5 things you know about the january 8 th shooting in tucson. charged with the

Discussion - . how we discuss what we read. how do we discuss literature?. how do you have a good discussion about what

Discussion - . what does all this mean?. implications. discussion. state major findings strengths and limitations design,

Discussion - . or, back to the real world!. droplet inertia impact on condensational droplet growth impact on droplet

Discussion - . look at the following cartoon and discuss with a partner what you think it means?. appeasement. definition

Discussion - . was the progressive movement a success? this question serves as the basis for the lesson. ask students