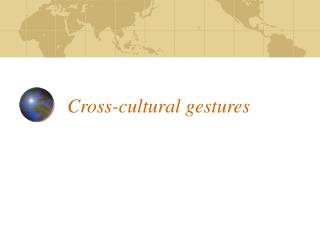 Cross-cultural gestures. Farewells. The American good-bye: hand up, palm out, wrist stiff, and a back-and-forth motion with the whole forearm and hand The European good-bye: arm up and extended out, with the palm down and just the hand bobbing up and down at the wrist Cross Cultural - . elements of healing. worldview. interpretation depends upon the contextual world from which the

Cross-Cultural Collaboration - . whose culture is it anyway? deborah bosely. our definition- let’s

Cross Cultural Competences - . “the ccc-project is a small but great substitute for the erasmus-project. it gives us