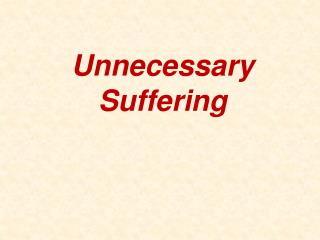 Unnecessary Delay - . the enemy of justice. the bottom line. the court, not the lawyers or the litigants, should control

Unnecessary Commas - . eric meyer and libby millsap. a comma does not separate a subject and its verb and its object.

Unnecessary Words - . english 1a dr. eigenauer. eliminate unnecessary words. they do make some good recommendations. they

Unnecessary Commas - . payton hoover and cassidy rosilio. although a comma ordinarily signals a pause, not every pause

Suffering - . how do we deal with it?. nelson mandela. “our human compassion binds us the one to the other – not in

SUFFERING - . a presentation of several different philosophical approaches to the problem of pain and