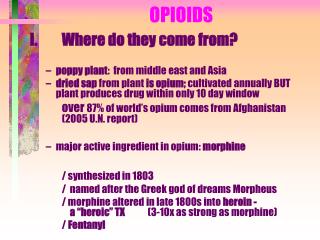 OPIOIDS. I. Where do they come from? poppy plant : from middle east and Asia dried sap from plant is opium; cultivated annually BUT plant produces drug within only 10 day window over 87% of world’s opium comes from Afghanistan (2005 U.N. report) OPIOIDS - . first, morphine in 1803 with active component opiumnarcotic is greek for stupor and is referred to

OPIOIDS - . definitions. opium : a mixture of alkaloids from the poppy plant - papaver

9Narcotics Opioids - . 授課老師：林惠茹. you have to think…. how do opioids work in your body? why do human