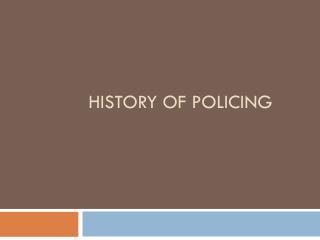 History of policing. What You Will Learn in the Unit. European History, Eras of Policing, Early American Policing, Texas Rangers, US Marshals, 1 st Police Force and 1 st Detectives. Word of the Day ~ Person of the Day. Principles of Policing: - . 1. the basic mission for which the police exist is to prevent crime and disorder. principles

Policing - . police. after a complaint or referral, a police officer has three options: unfounding charging initiating

Policing - . how effective was the metropolitan police force?. what a cartoonist wanted us to believe. look at each part

The Evolution of Policing - Early british policing . the constable and sheriff (shire-reeve) are from early british

The Nobility of Policing - . adapted from “the nobility of policing: guardians of democracy” by michael nila ,

COMMUNITY POLICING - . the political era the reform era the community era. the evolution of policing strategy. the

Tribal Policing - . framework for success. a startup department. why should we do it (doing it for the right reasons)?