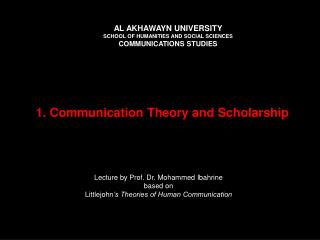 Mass Communication Theory and Propaganda Chapter 4 - . america in the 1930s. a threatening era both at home and abroad

Queuing Theory For Dummies - . jean-yves le boudec. all you need to know about queuing theory. queuing is essential to

INFORMATION THEORY - . communication theory deals with systems for transmitting information from one point to another.

Communication: Introduction - . the exchange of information, ideas and knowledge between sender and receiver through an