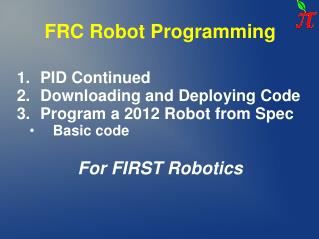 Integer Linear Programming - . introduction. when one or more variables in an lp problem must assume an integer value we

PLANNING - . ivan bratko. acknowledgement: some of these slides were adapted from d. nau’s course on planning. example:

Coding vs. Programming - . from http://thinkaround.blogspot.com/2006/01/coding-vs-programming.html coding is about how