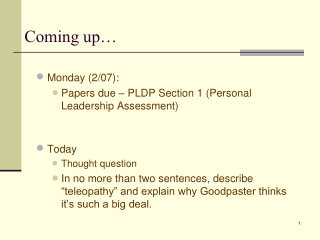 Leadership Styles Assessment - . i have the final say over decisions made within my group. i let group members make their

Personal and Spiritual Assessment - . dan fountain, md, mph. the importance of this. in medicine, the physical history

Personal and Spiritual Assessment - The importance of this. in medicine, the physical history and review of symptoms

Leadership: A personal reflection - . jim dale. core theme. “if you want to understand today you have to search

Profound Leadership Assessment Tools - . stan payton, profound leader. what is the first thing you need to know before

Instructional Leadership in Assessment - . a joint project between medicine hat school district # 76 and the alberta