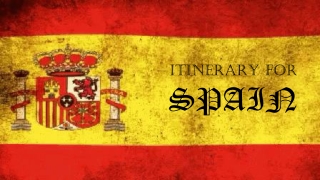 ITINERARY FOR SPAIN. General Information. Spain is known for its spectacular beaches and sunny climate but its diverse landscapes are no less not to forget its world famous cuisine and striking architecture. Itinerary: - London, pa. everything you get:. itinerary:. secure your spot: visit our tour website:

Itinerary - From your street corner to the dunes of mars, virtual environments in vertical applications bruce damer usc

Itinerary - . day 3 -breakfast at 9:30 -visit the louvre -have lunch and sample some french cuisine -see the arc du

OUR ITINERARY - . adria we will start our itinerary from our school yard. we will leave at 8 o’clock by coach to reach

Itinerary Making - . planning the guest’s itinerary. “itinerary – it is the schedule of activities of a guest,