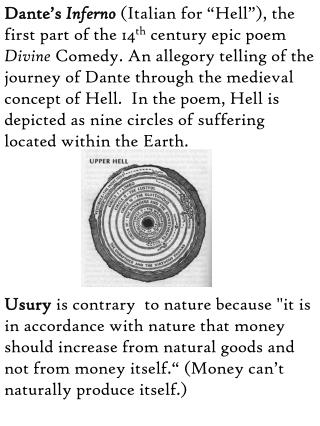 Dante’s Inferno (Italian for “Hell”), the first part of the 14 th century epic poem Divine Comedy. An allegory telling of the journey of Dante through the medieval concept of Hell. In the poem, Hell is depicted as nine circles of suffering located within the Earth. The government s vision - Presentation slide 1.2. why do schools use ict? . extending learningenriching the

Dante s Inferno - The dark wood. midway in our life's journey, i went astrayfrom the straight road and woke to find

The Inferno - A few important definitions?. allegory- an expression, by means of symbolic fictional characters and

THE MEANING OF HELL - . the punishment of the wicked. the 15th study in the series. studies written by william carey.

The Fear of Hell - . “and do not fear those who kill the body but cannot kill the soul. but rather fear him who is able

The inferno: Guide to the 9 circles of hell - . i am the way into the city of woe i am the way to a forsaken people i am

The Mysteries of Hell

The Inferno By Dante Alighieri - . pre-reading assignment. rank the following actions from least offensive to most

The Inferno - . a few important definitions…. allegory - an expression, by means of symbolic fictional characters and