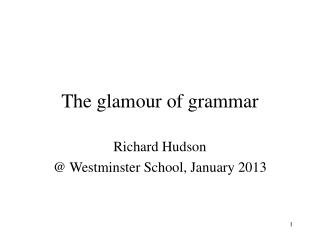 The glamour of grammar. Richard Hudson @ Westminster School, January 2013. Etymology. A link between glamour and grammar? or between the words glamour and grammar . a historical link so part of etymology the study of word origins. The evidence. What's gramarye?. So what?. The glamour of grammar - . richard hudson @ kcs, october 2012. etymology. a link between glamour and grammar? well,

The lure of linguistics, and the glamour of grammar - . richard hudson royal grammar school, guildford may 2014. my main

The Glamour of Indian Wedding Sarees! - The most glamorous, graceful, and stylish dress an indian woman could wear at her

Tresor – House of Glamour - After long days of work, hectic schedule and hard work a human body starts losing its

The Glamour and the Glory - . high industrial football in europe 1955-1974. changes in football in the late 50s- early

Glamour Photography - . by nicole avey period. 5. what it is?. glamour photography is a form of photography that focuses

THE GRAMMAR OF RECIPES - . 1º direcciÓn cocina. read the recipe how can you translate the words in red ?. scones 400 g

The Rules of Grammar - . summarized by: alexandra grosset and vicky sales. the parts of speech. a 1. names a person,

Grammar of the Week - . monday. using he, she, it, they: transparency la31 replace the following with a pronoun. mr.

THE ORGANIZATION OF GRAMMAR - . when we speak of the organization of grammar we are going to consider two important

The Grammar of Poetry - When we formally discuss poetry, we must use the proper language. poetic terms are often