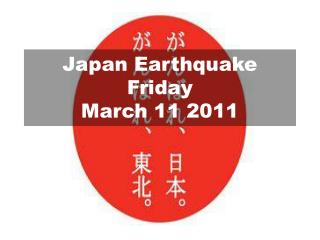 Japan Earthquake Friday March 11, 2011 - . the full scale: before and after in sendai. location. the earthquake occurred

Tohoku Japan Earthquake - . by: millie , casey, mckinzie , abbey in the 65 years after the end of world war ii, this is

Japan Earthquake Relief - . help donate to a great cause!. japan has suffered 3 times the damage; there was first an

Earthquake rattles Japan - The aftermath of the magnitude six