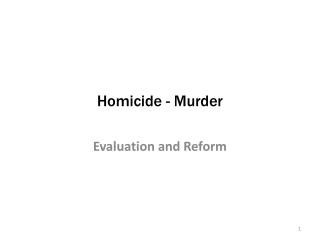 Homicide - . what do we mean by homicide?. starter. individually think of as many different ways as possible that a

Homicide - . the killing of one person by another. criminal homicide : committed with intent or a plan, or due to

HOMICIDE - . murder manslaughter both are common law offences. murder. in this lecture we will consider: the

Homicide - . murder. can be met with fear, curiosity, or fascination many people cannot comprehend the motivation

Homicide - . homicide. the killing of one human being by another. criminal : a person’s reckless actions, without

Homicide - . murder. can be met with fear, curiosity, or fascination many people cannot comprehend the motivation