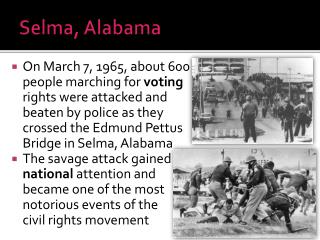 Selma, Alabama. On March 7, 1965, about 600 people marching for voting rights were attacked and beaten by police as they crossed the Edmund Pettus Bridge in Selma, Alabama Selma, Alabama – Marching to vote - . lesson starter: write down the five things you should focus on when answering a

Selma, Alabama and the Right to Vote - . 1965 martin luther king decided to launch a protest march about the blacks right

AC Repair Selma - Airtxac.com - The primary thing is keeping the requirement for ac repair selma fix in any case. you