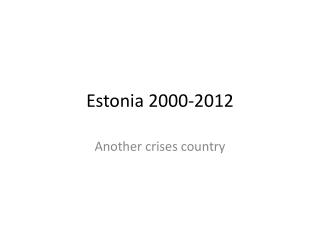 Estonia 2000-2013 - . another crises country. background and history. details of the relevant history, pertinent to its

Estonia - What i saw there. after the 80 countries i visited, my favorite holiday places are http://moraira.site88.net/

Estonia - . by dorothy carter. a brief history of estonia and their